Creating content that keeps you glued to your seat !

Finally made it to the Bondi end of Sculpture by the Sea and the sight of an artwork has me cocooned in a moment of reflection.  So far, a lot of the sculptures featured this year are too 'concept' orientated and a bit gimmicky.  Perhaps because the concept doesn't match the execution.

The workmanship on many pieces is almost deliberately sloppy in some places.  Or the "idea" too apparent.  But that is art, is it not ?!  In love with ideas.  Always wanting to see more than what is there - aiming for the fourth dimension.

It is why we fell out of love with realism, many decades ago.  Ask Picasso - Cubism made him famous, not his 'Blue Period'.  Every modern and post-modern art movement has said "let's grab the fabric of reality and twist it this way".  "I'll show you something new or better yet reinvent the new".  But for all my critiques of 'concept' obsession, every so often a concept appears that blows you away with the size of it.  The amazing breadth of its complexity or the brilliance of its simplicity.

Standing in front of an art feaure called Alchemy [by Lucy Humphrey] is one of these moments.  People passing it don't notice it at first.  Then a glimmer or strange translucence catches their eye, and they get startled, look again  and go "Ooh, that's clever". 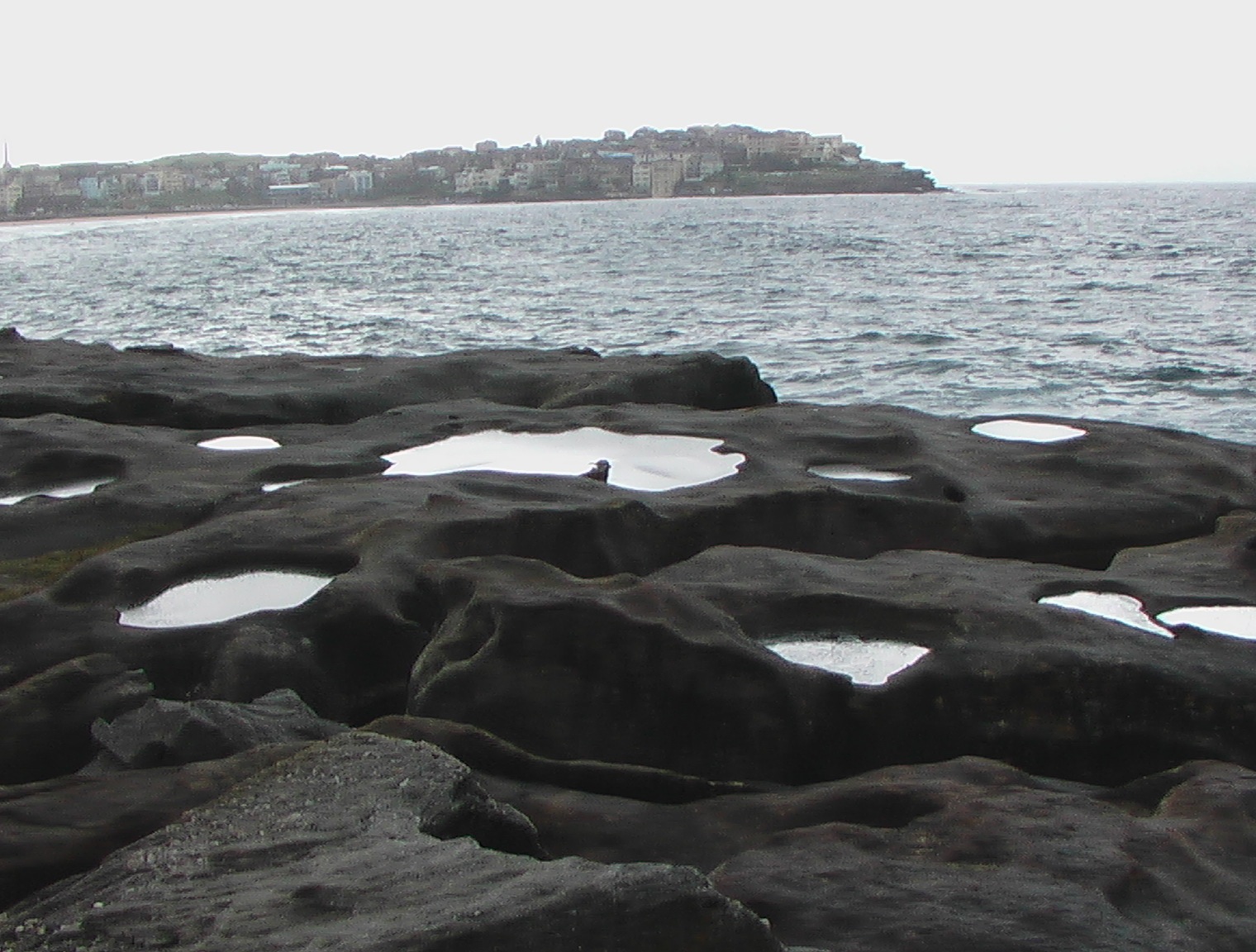 And it is.  Simple but brilliant.  Alchemy is this = You pass escarpments of sandstone with rock puddles in them, but near the Bondi end of the walk, the rock puddles are made of mirrors cut into the exact shapes of the amorphous concaves and holes in the stone.  You don't even notice the difference at first - it looks exactly like water.  That is a testiment to the technician's skill.  They have been shaped and cut so expertly that, until  you see the surface catch the light brighter than water, you are unaware.

Mirror rock puddles, so what !, you might say.  But the ideas in the concept are vast and cosmic. i.e. what would it be like if our natural environment was transmuted ?  What is real and what isn't real ?  And the strange alchemy of mirrors and puddles.  I used to think mirrors were doorways and that if you looked into a puddle, something   else would stare back at you.

Obviously there is no science behind this - it's the realm of the fantastic - but the notion still lingers.  And this artist has achieved all these stratospheric ideas with sharp execution.

Precision and execution are everything, not just concept.  The mirror puddles are placed amongst the real water puddles - sloppy execution would have shown them up.

An elderly lady stops and says to me "which is your favourite".  I tell her it's this one.

She replies "I live on top of here and last night I looked down at this and thought isn't it lovely the way the moon glows in the rock water....I thought it was water".

NO 6 -Merry Andrew the limner arrives by Stephen Hall.

looks like Sidney Nolan broke Ned Kelly on the horse and captured him in plaster of Paris.  It is twisted and contorted at painful angles but recognisable enough to say - yes, there is a man on a horse.

NO 9 -Rising tension by Tracy Luff

Oh please - twisted ropes formed into tight knots for tension. -  too 'gimmicky' and condescending to the audience.  I don't mind the obvious but as a visual concept that is insultingly simple.

NO 10 - Eye sea you by Tim & Sharyn Amber Wetherell

eyes in the sandstone cliff wall.  Simple and obvious but I love it.  You can put eyes anywhere and I'd be drawn to them.  It is one of my visual motif obsessions.  I like to watch and am not adverse to being watched though I'm hardly an exhibitionist, more a voyeur in reverse.  Wonder what that says about me...

The totem poles of a hippy alien tribe. Colourful ceramic and clearly plant and animal inspired.  Bunions, cucumbers, pumpkin, melons and spheroidal columns feature in their forms.  There's even a cat face on one with leaves for ears and bulging human eyes.

A non starter.  The kind of rough and basic sculpture we all did at primary school - the cement truck.  With wheels like melted Arnotts Mint Slices and a dogs football for a cement mixer all demeaned in clay - So unimpressed!  And it's here because.....

Beautiful - pretty and ornate.  A giant square vase feature with that classic blue and white colouring that Chinese Ceramics have. And ochre coloured clothed figures of girls and women protrude from the structure, all reaching for the top of the vase.  Three of these figures sit on top of the rectangle in a state of undress, calm from having achieved the summit.

SOOOOOO OVER blocks and cubes and squares being jumbled together in any sort of random formation and being labelled 'art'.  Is this the biggest con job known to man or what ?  Usually these bland oddities and nonentities are objects of steel, iron, or timber frames cobbled into some unstructured form.  Occasionally you will encounter a work which has a pleasing or playful asymmetry but most of the time you will just shrug your shoulders and walk on.

I swear it is the same artists being featured year after year.  They really have to get new names and new approaches because the work is stale and no longer interesting.

The whale tail guy.  Seen his work before.  Fluid and economical but that sense of the same permeates here.

Hate it.  Another WTF.  blue sticks at a jumble sale. Say no more.

It's the windmill kiddie twirler guy again.  Has a murmur of visual appeal when the twirler spins, but no breeze makes it a very dull toy.  Next please!

Wow, a stone sculpture that looks like a sheet thrown over a patio chair.  Everyone can go up to it and say that's crap - that's just a sheet thrown over a recliner.  Than they brush against it and go "Ooh, that's made out of stone - that's a SCULPTURE that is!  Isn't that clever!", and feel satisfied that they got the point.  I think it would have been truly clever if the art-piece was an actual sheet on top of a rocking chair.  Than the artist really would have been fucking with you.

Bring the Dadaists back, I say.  Mindfuckers par excellence.  Than as I walk away, I see a dad, pushing a pram, lean forward and try to grab the sheet only to discover it is stone.  He looks a bit sheepish, and glances sideways to check nobody saw him.  Perhaps the artist was right after all.

NO 40 - Tide and Time: Granite Monolith II  by May Barrie

And YES  ladies, gents and sports fans, they've done it AGAIN.  They've given the biggest sculpture prize in Australia to an incomprehensible piece of junk.  The Balnaves Foundation Sculpture Prize, all $60000 of it, has gone to a slab of rock.

That's exactly what it is.  The granite slab has a rough, natural surface on one side, and a couple of smooth concaves or troughs have been ground into it's surface on the other side.  It's not merely unfinished.  It's 'unstarted'.

Surfer dude saunters up to me scribbling away and says "I don't get it.  Maybe there's something in there, but I can't see it.  Still, I'm not an artist so what do I know".  He shrugs and casually brushes past it, all tanned incomprehension and easy manners.

No surfer dude, it's not just you.  People in the Renaissance would have been buried alive for producing crap like this.

A kid looks at it, and walks back to his bemused dad - "it's ugly" he denounces loudly.  Dad doesn't seem to disagree, but he says nothing, just blinks at it.  One guy lectures a group and says "Yes it's not much but I bet it's the kinda thing that if you had it in your backyard, after two months you wouldn't be able to live without it."

Don't bet the house on it mate!

NO 28 - Morpheus by Phil Price

How could they have given the prize to the granite slab when Morpheus looms bright and happy and whimsical, I don't know.  But Morpheus has won a prize -  the Sydney Water Environment Sculpture Prize.  and I don't begrudge it a cent.  Morpheus is so simple, elegant and wondrously evocative.  How to describe it ?.... It is a quadrant of calypso waves or connected lemon coloured petals shooting off a slanted cone stem of smooth polished silvery metal. It twists and moves in graceful undulations with the wind suggestive of an exotic bird, a stray cloud, an inscrutable but benevolent guardian.

It's very appealing though you can't precisely pinpoint why, and that's part of its charm.  One girl, toying with her heart amulet, says it reminds her of something she had as a child, and smiles shyly.

As I walk off to the lookout off Marks Park at Tamarama, I glance back at her.  She's still gazing at it, amulet swinging idly from her fingers.

Oops, you forgot something.

The words you entered did not match the given text. Please try again.

Reply Jamosvic
12:24 PM on June 5, 2021
Lovely postings. Appreciate it!
https://bestessayseducationusa.com/
how to write the best essay
write my essays
help me write essay
dissertation research
writing essay help
writing a thesis statement
words to use when writing an essay
thesis help online
can i pay someone to write my essay
couseworks
how to write personal essay for college
writers help
website analysis essay
https://contest101.webs.com/apps/guestbook/

Reply Jamosvic
5:36 AM on June 8, 2021
Many thanks, A good amount of info!
https://homeworkcourseworkhelps.com/
ivy league college essays
https://writingthesistops.com/
cheap essay writing service
https://bestessayseducationusa.com/
how to write scholarship essay
https://topessaywritinglist.com/
how to write an cause and effect essay
https://geoclick.webs.com/apps/blog/show/43906001-informatica-evi

Reply Jamosvic
11:38 AM on June 12, 2021
Cheers, An abundance of knowledge!
https://writingthesistops.com/
the college essay
https://bestessayscloud.com/
show me how to write an essay
https://essaypromaster.com/
how to writing essay in english
https://freeessayfinder.com/
writing analysis essay
https://charakterystyki057.webs.com/apps/blog/show/49018662-swoja
-warto-347-263-osi-261-gn-281-322-a-jej-prezent-po-380-egnalny

Start a Free Blog at Webs.com